How many companies do you know of that have been in business continually for over one hundred and twenty five years, are still run by the descendents of the founder, are in the same town, and on the same site? 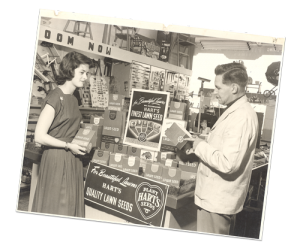 This is the proud and long established history of The Chas. C. Hart Seed Company. Today the company is owned and operated by members of the fifth and sixth generations of the Hart family. Theirs is a story of true Yankee ingenuity and perseverance.

The Chas. C. Hart Seed Company was founded by Charles C. Hart in 1892. He had been associated with the Johnson & Robbins Company for fourteen years, and began a small consignment seed package business in his home. In the back kitchen, he utilized the space as a packing room, office, and warehouse. This venture became the sixth seed firm in Wethersfield, Connecticut.

In 1894 Mr. Hart took a partner, purchased another seed business and as business increased requiring more space, moved into the former Johnson & Robbins Company. This is the location that the Hart Seed Company still calls home today.

In 1916 Mr. Hart bought out his partner’s interest in the business and his three older sons became associates of the company. During the years that followed, Hart Seed was able to acquire several companies, including the fifty year old E.M. Lyman and Son out of Springfield, Massachusetts, which was moved to Wethersfield in 1922. As a fourth son joined the company and the company grew, other seed businesses along the East Coast became Hart Seed acquisitions up through 1962.

In 1943, the old original wood framed building of The Chas. C. Hart Seed Company went up in flames. Everything was destroyed. Today you will find a brick office and warehouse complex on the same site in historic Old Wethersfield, Connecticut.

The Chas. C. Hart Seed Company carries a full line of vegetable and flower seed that is used by independent farmers, golf courses and landscape professionals throughout the Northeastern United States. Regardless of whether you are just starting a new venture in gardening or have been enjoying a garden for years, The Chas. C. Hart Seed Company is one of the oldest names in the business. With that comes quality, reliability and peace of mind.